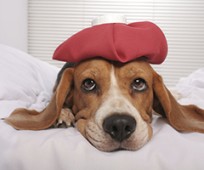 Minnesota is the latest state to report cases of the canine flu, following a recent outbreak in the Chicago area. Other states confirming cases of CIV (Canine Influenza Virus) include Michigan, Wisconsin, Ohio, Indiana, Georgia, Iowa, Massachusetts and New York.

The latest canine flu cases are linked to a highly contagious strain of the H3N2 virus which had not been previously detected in North America, according to laboratory scientists at Cornell University and University of Wisconsin in findings that were released in April.

A vaccine is not yet available for this strain of canine flu, although it is presently under development. The current outbreak has affected more than 1,000 dogs in recent months. According to the Star Tribune in Minnesota, Dr. Paul Anderson stated, “The fatalities are very low for this strain, but it’s one that makes dogs feel pretty crummy for a few days.”

The ASPCA advises that CIV strain H3N2 is a relatively new virus and therefore most dogs have not been exposed to it before. Dogs of any age, breed or vaccination status may be susceptible to this infection. Symptoms include:

Dogs should be diagnosed by a vet and treated quickly. The ASPCA indicates that this strain has been commonly seen in Asia and generally lasts for about 2 weeks but could be longer. There have been no reports that this flu virus sickens humans, but it is highly contagious for other dogs. Recommendations include keeping dogs in affected states away from wherever pooches congregate such as dog parks and grooming facilities.

For further information please visit the CDC, AVMA, ASPCA and other websites.