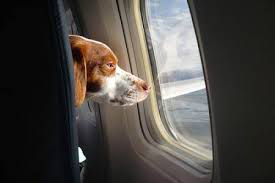 ACCORDING TO U.S. DEPARTMENT OF TRANSPORTATION DATA released last month, 2014 was one of the safest in recent years for pet transportation. IPATA, the International Pet and Animal Transportation Association, remarked, “As we look at the bigger picture, the numbers are incredibly low and decreasing each year. Air travel is the safest and most humane mode of travel for pets.” The DOT review of 2014 indicated that there were 17 fatalities and 26 pet injuries in 2014 as reported by U.S. airlines.

IPATA estimates that at least 1 million pets travel on U.S. airlines annually. IPATA also advises that the vast majority of health incidences that occur during or after flight are due to pre-existing medical conditions that emerge during the change in surroundings and/or the environment involved with the relocation. New regulations for 2015 require further information be provided to the DOT by American airlines, thereby expanding the data collected on pet travel by air. The DOT will now require information from more carriers and will include in-cabin baggage, accompanied baggage, unaccompanied air cargo shipments and breeder shipments. U.S. airlines will be responsible for filing detailed year-end reports that include the total number of animals transported and the total number of animals that were lost, injured or died during air transport. WorldCare Pet applauds these new regulations so that the public can be fully advised about the care of pets when they are being transported by air.

According to CEO Reece McDonnell,
“With many pet moves involving long distance travel, we relocate a wide range of pets by air. We find the recent report regarding the increasing safety of pets to be consistent with our experience as an international pet relocation company. We look forward to the expanded statistics supplied by the airlines and we hope the DOT will continue to augment its efforts to furnish clear data on pet transport.”