PET PARADISE FOR AIRLINE PAW-SSENGERS TO OPEN AT JFK 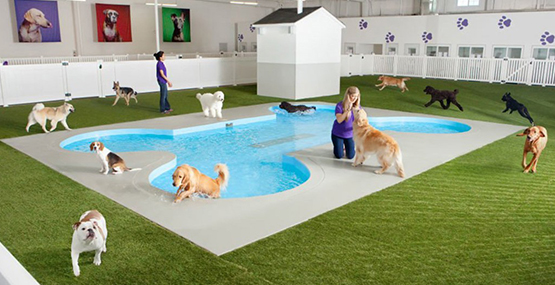 At a cost of $48 million, JFK Airport in New York is building what is being touted as “a state-of-the-art veterinary hospital with animal day care and more efficient ways to transport animals worldwide including exotic species,” the Port Authority
announced last month.
Others describe it as the first luxury animal terminal to exist. Developer Racebook Capital identifies it as “the world’s only privately owned animal terminal and USDA-approved, full-service, 24-hour airport quarantine facility for the import and export of horses, pets, bird and livestock.”
SOME OF THE FURRY & FEATHERY FACTS:
Called the ARK, the pet terminal – the first terminal in the U.S. exclusively for animals – will manage 70,000 airborne animals annually when it opens in 2016
Stretches over 178,000 square feet
Will boast the Paradise 4 Paws Resort with a bone-shaped splash pool for pooches & jungle gym with live trees for cats
Overnight accomodations include suites with flat screen televisions. The “top dog” suites have human-sized beds, can include a family portrait and optional webcam for viewing your pet. Grooming services (including pawdicures) and obedience training are available.
24/7 medical care includes emergency services such as surgery and advanced diagnostics, and access to Cornell University veterinary staff
Features species-specific habitats for horses, birds, cats, dogs and cattle. There are 48 horse stalls that are climate-controlled with showers and fresh air constantly cycled in.
Penguins have their own space for mating privacy.
Designed in conjunction with veterinarians and animal behaviorists