GOING THE DISTANCE TO REUNITE GOBI WITH ULTRAMARATHON RUNNER 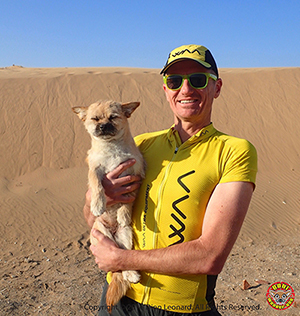 “We fell in love with a dog in China, but how do we bring her home to the UK?” 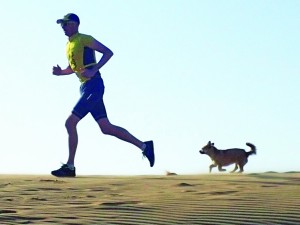 Extreme marathon runner Dion Leonard was running a 155 mile race through the Gobi Desert in China last June when he was suddenly joined by a small stray dog on the second day of the race. Side by side, the sweet canine ran four stages of the race with Dion – an astounding 77 miles through the intense desert – creating an instant bond that would be the beginning of an extraordinary relationship. Dion described the experience, “At the finish line, she followed me into the tent and we slept next to each other.” Dion named his new companion Gobi, and her story sizzled on social media, with her great trek alongside Dion earning her worldwide attention and admiration. 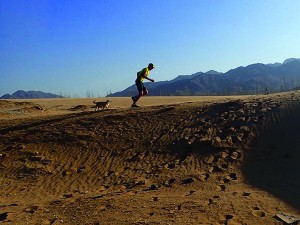 Following the race, Dion and his wife Lucja began to investigate how to adopt Gobi and bring her to their home in the United Kingdom. Lucja and Dion contacted WorldCare Pet Transport‘s offices in China with their interest in relocating Gobi, “We are desperate to bring her to the UK to live with us. Gobi is currently being looked after in Urumqi as we figure out how to manage her move.”  Kiki Chen of  WorldCare‘s office in Beijing responded swiftly, beginning the arduous process of internationally relocating a pet that didn’t possess any ownership or vaccination documents. 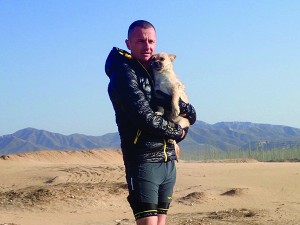 As the planning began to unfold, Gobi went missing in August in Urumqi – a city of 3 million residents near the Mongolian border. A widespread search ensued, with volunteers canvassing every avenue from animal shelters and parks to taxi drivers and fruit vendors. Kiki was determined to help the Leonards find Gobi for the transport back to Beijing and then home to the UK. Coordinating efforts with Lucja and the local race administrator, Kiki recommended a campaign to broadcast “lost dog” notices using digital signage on city buses to spread the word to the most citizens in the area. Kiki arranged the reward amount for the return of Gobi as well as the payment. After 10 days, Gobi was found by a family and returned to Dion! With Gobi now safe, Kiki arrived in Urumqi, coordinated with Air China for Gobi’s passage and health certificate, and accompanied Gobi and Dion on the flight to Beijing where Kiki would then organize the international travels of this wonderful fur-baby. 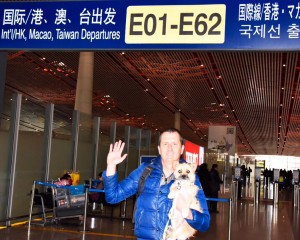 Lucja recalls,”We had to do a lot of research to find pet agencies that worked on worldwide relocations. WorldCare Pet was the only agency who was willing to assist us as the situation was more complicated than normal – with both of us not in the country at the time, and Gobi in Urumqi needing to first get to Beijing to start the entire process.”

As daunting as the move was, WorldCare’s specialty lies in reuniting pets with their families, with the knowledge and determination to manage the complex details involved with pet relocation. Lucja and Dion explain, “Besides the language being an obvious challenge in this situation, we were also faced with internal requirements that needed to be completed. The most difficult aspect was getting Gobi from Urumqi to Beijing which Kiki handled with extreme professionalism, and even went to the added step of flying the four hours to Urumqi to ensure Gobi’s welfare and safe transport. Without Kiki and her team, the entire process would not have been possible.” 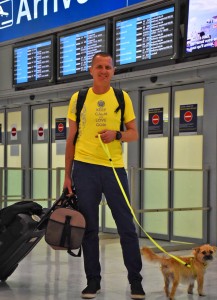 Gobi had no identity, no ownership or medical records, making the logistics of moving Gobi an enormous undertaking. Understanding the complications of this particular move, Kiki set out to deal step by step with the requirements, from establishing ownership, to handling the health and quarantine needs, and then the transport logistics of moving Gobi to Edinburgh, Scotland. The process was lengthy and the costs considerable but the incredible connection between Gobi and the Leonards was undeniable. 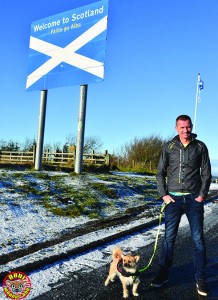 The timing to relocate a pet from China to the United Kingdom generally requires approximately 120 days. Gobi received an initial rabies vaccination, then had a 30-day wait period followed by a blood title test, and then a 90-day wait from the date of that test with a final check to determine that she had the necessary level of rabies antibodies to meet the standards. Gobi spent time both with Kiki at her boarding facility and with Dion when he was in Beijing during this waiting period. After the desert race, Dion discovered that Gobi needed hip surgery, and Kiki also addressed that unexpected medical issue, securing a vet in Beijing and assisting with the recuperation process. 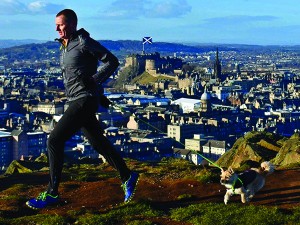 More than six months later, but with great joy, we’re so very happy to report that Gobi officially arrived to her new home recently, where she is now enjoying biscuits and running in the expanses of Edinburgh! Lucja and Dion are thrilled that Gobi’s travels home have come to a wonderful close, as is the whole WorldCare Pet Transport family. Lucja and Dion shared their thoughts, “WorldCare Pet has provided unfaltering communication throughout the entire process which insured a great peace of mind for us. The team in Beijing in particular displayed an amazing level of commitment and dedication and they bent over backwards to insure Gobi’s safe arrival in the U.K.”

Look out for more on this story in the future . . . talk about happy endings! Dion Leonard’s book “Finding Gobi” will be released in June – for details, visit www.findinggobi.com